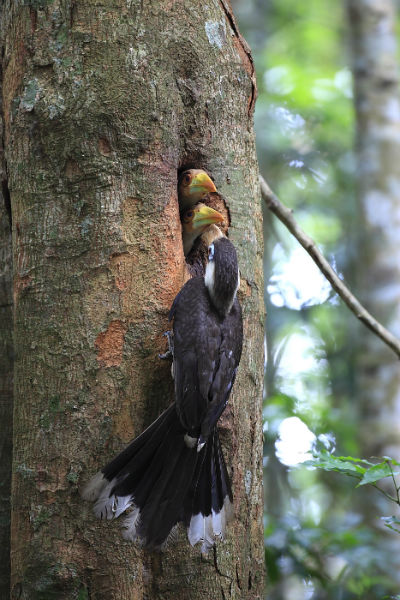 Hornbills are birds known to stay with their mates for life, according to the expression “one husband one wife”, which is an outstanding behavior, even for birds. When ready to mate, the hornbill couple will leave the flock to live together. Just like human beings, a hornbill does not necessarily choose a mate of similar age. For some hornbill couples, the male might be several years older than its mate, and for other hornbill couples, the female may be older.

But in the case of many species, such as the Great Hornbill, the White-throated Brown Hornbill and the Oriental Pied Hornbill, once reaching maturity, age is difficult to determine, unlike the Wreathed Hornbill where age may be estimated by the number of ridges on its casque.

The hornbill nesting ritual is a very individualized process and involves not only entering the nest, laying eggs, incubating the eggs, and then taking care of the chicks, but the female hornbill also closes off the cavity entrance and leaves only a narrow vertical slit, just wide enough for the male hornbill to pass food piece by piece to her while she is sealed inside.

She remains inside until the young chick is grown up enough and ready to fly, at which time she cracks out the sealing material.She then flies out from the cavity with her chick, except for some species and circumstances where she may leave the nest before the chick.

The entire process of preparing the nest and raising the chick takes 14-18 weeks, depending on hornbill species and size. These unique nesting rituals effectively differentiate hornbill from all other families of birds anywhere in the world,and the whole process must be very stressful on the hornbill couple. While sealing herself into the nest cavity, the female hornbill must have a very high level of trust in her mate to look for the food that she and her chick will require the lengthy incubation and nesting periods.

The male must do all he can to find the food and bring it back to the female and the chick throughout the entire period.