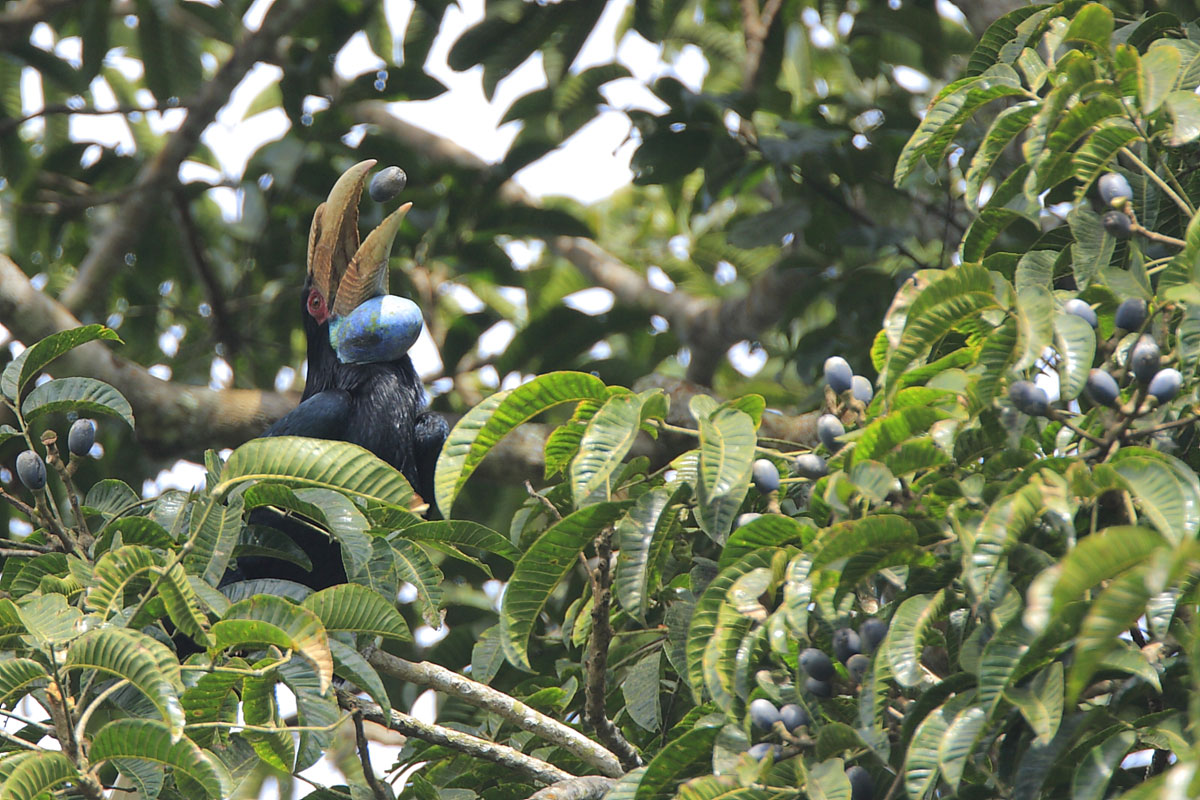 Hornbills have an intriguing feeding behavior. They have a very short tongue and therefore are unable to maneuver food into the mouth before swallowing. They usually pass food back and forth in the tip of the bill to soften it and then jerk back the  head so tossing each item into the throat for swallowing.

This allows researchers to count the fruits consumed by hornbills. Male hornbills collect and store a number of fruits in the expanded esophagus and they bring these back to feed the female and brood. At the nest, the male regurgitate each stored food item one by one into its mouth, rolls the fruit along the curved bill to the tip, and gives it directly to the female in a ‘bill-to-bill’ pass.

Again, here is a second chance for researchers to identify and count the number of food items delivered.

Immediately after the female hornbill has sealed herself into the nest cavity, the male hornbill will fly away from the nest site, but return infrequently to the nest to feed the female about 1-3 times per day. Then, between weeks 2-5 of the nesting cycle, the male will increase the amount of food fed to the female, the increase in frequency of feeding corresponding with the timing of molting by the female.

By week 5 after the female is imprisoned, the chicks of Oriental Pied and White-throated Brown Hornbills are hatching, while the chicks of the Great and the Wreathed Hornbills only hatch by Week 7

After the females has sealed herself in and completed incubation, the hornbill chicks hatch around mid-March. The workload of the male keeps on increasing, depending on the age of the chicks, and the male will by now be working harder and harder, starting from before dawn and continuing until after sunset. During the month of April, the chick or nesting growth will be at its greatest and the male will be doing feeding trips on average every hour or even more often. Besides the increase in feeding frequency, the species of food items that the male brings back now become more diverse.

These fruits are sources of a more nutritional diet, including proteins, fats and carbohydrates, and the hornbills will certainly obtain most of their energy from fruits.

However,these nutrients from fruits are still insufficient in proteins and it is during this period that the male hornbill must also look for animal food to bring back to the nestling(s), including insects, snakes, tree lizards, fish, crabs, frogs, millipedes, earthworms, birds, bird’s eggs and chicks, rats, squirrels and bats.

Every single day, a large hornbill chick eats between 200g and 400g of food, 85% of which is made up to fruits and the remaining 15% of various kinds of animals. The four hornbill species of Khao Yai National Park definitely utilize the same food resources and feed on similar fruit diets, except for the quantities taken, whereas the types of animals taken show less similarity and reflect more the feeding niche of each species. For example, the White-throated Brown Hornbill forages under the forest canopy and its diet consists to a greater extent of animals than that of the other species of hornbills since it is more of a predator and captures many insects.